Being back from London I can now summarize my learning process. Overall it was a great experience learning to paint with oils. The tutor was very good and I had the feeling, that I’ve learnt a lot.

On the first day we did the sight-sized drawing and toned the canvas with raw umber and solvent. Please see the last post for details.

On the second day we transferred the drawing onto the canvas: 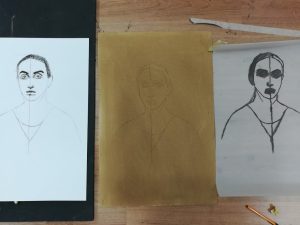 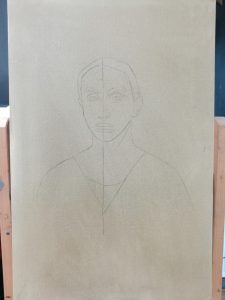 This is the drawing transferred to the canvas. 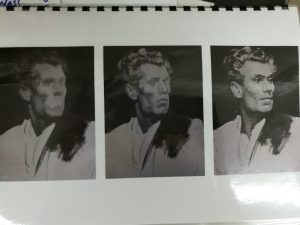 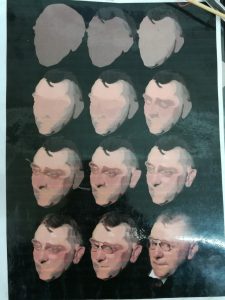 She showed us the examples above on how we should approach the painting. As we did with the drawing, we should start with the larger parts of the face.
She then told us a bit about colour theory. The school works with the munsell colour system and we used a limited palette after Zorn of six and later eight colours.
The three most important parts of colour are tone/value, the hue and the chroma. Chroma refers to the intensity of the colour. Like when the colours look cold we should add warm colours like yellow or red to make the colours more intense. Also if the colour is too red for example, we should mix in a complimentary colour to weaken the intensity. Also grays are very important for skin tones. 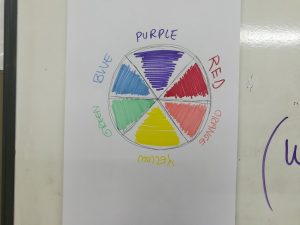 The tutor made a simplified colour wheel to show us the complimentary colours. So if the painting is too red, we should add green to neutralise the colour.

In general faces seem to be yellow on the skull/forehead. Rosy or red on the cheeks and green under the mouth.

The colours we used were: 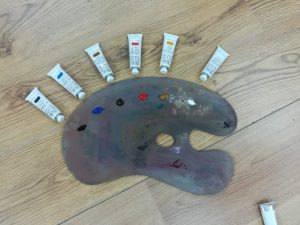 Ivory black, ultramarine blue (which I never really used because the ivory black has blue shades in it), raw umber, cadmium red, yellow ochre and titanium white. A more translucent white would be zinc white and the best white would be lead white, which is very toxic. In a later stage we added titanium yellow and alizarin crimson to the palette.

The general rule of oil painting is fat over lean. So we should use more solvent in the beginning. I’m not a fan of solvents so I used the pure oil colours most of the time.
1) Sansodor solvent
2) 50/50 oil/linseed oil
3) more oil

We painted alla prima and wet into wet. When the paint becomes tacky we could add medium. The best way is to mix the right colour on the palette. But this is very hard so there are not many artists who can achieve this.

The most important part at the beginning stages is to simplify forms. The hair has one tone, the forehead, the side plane and the eye sockets as well as mouth and ears. Five mixes should be enough for the first parts of the face.

Light parts: mix white with yellow ochre. Hold it onto the model on your palette knife to see if the colour fits. Then we could add very few red drops to the mix. If it’s too yellow we should add more white. But we had to be aware that white “kills” colour. 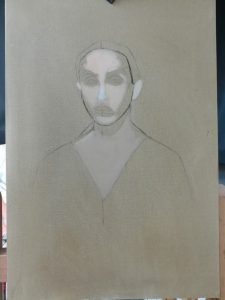 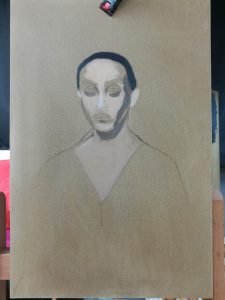 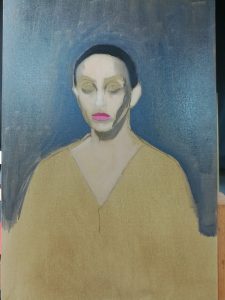 Painting the first layer of the background and lips as well as the shadow under the nostrils. 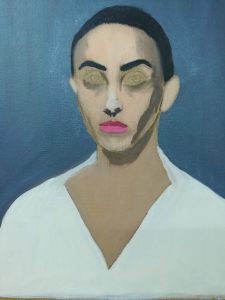 Painting the first layer of the shirt. Adding eyebrows (which I had to adjust later). 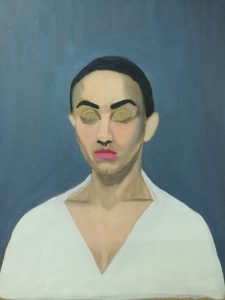 Adding more chroma to the face. 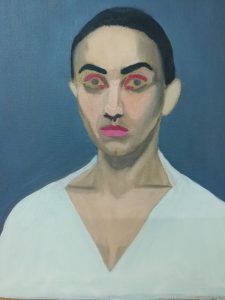 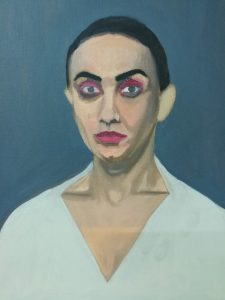 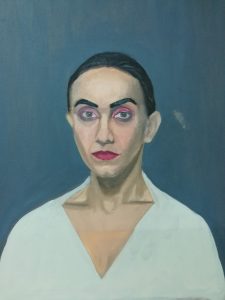 Here I began to smooth the edges. 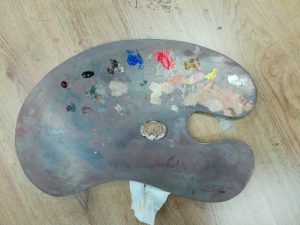 This was the palette on my last day. Way better organised than the first time! 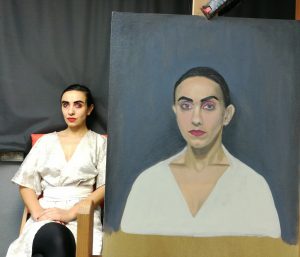 Here the painting compared to the sitter. I adjusted the shape of the lips as well as the nose. 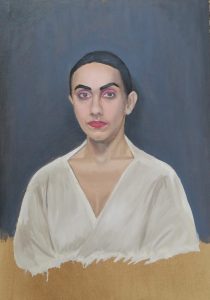 This is the “finished” painting after five days of working on it. All in all I worked 30 hours on this painting. I wouldn’t consider it finished. But I was happy with what I had achieved. It was my first coloured oil portrait painting. 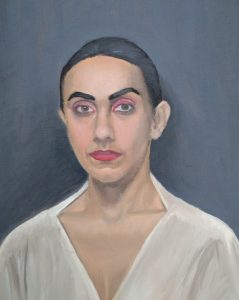 The painting in more detail. I will do another picture of it after a few weeks when it is more dry.